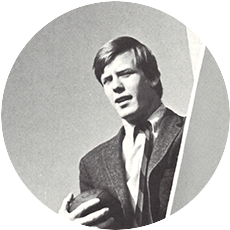 As a starter on GA's varsity basketball team for five years, Paul Hutter made quite an impact on the record books. He received All-Inter-ac status for each of those years and led the basketball team to Inter-ac Championships in 1967, 1968 and 1969. He was the Inter-ac scoring leader and player of the year in 1969 and 1970. He held GA's career scoring record for 23 years, the single game scoring record for 16 years and he continues to hold the third highest scoring record in the Inter-ac. Though Basketball was Paul's primary sport, he also played football and competed in track. He was a four year starter on the football team, earning All-Inter-ac status each of those years. He was the Inter-ac player of the year in 1969 as well as a recipient of the Maxwell Club award for outstanding play in the Inter-ac. After GA, he went on to graduate from Princeton University.