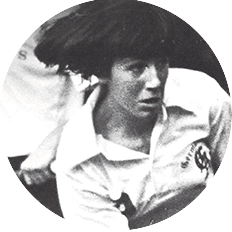 Patsy Huntington entered the fifth grade at Germantown Academy in 1972. In the eighth grade she won the Francey Garvin Memorial Award. This award is presented to the young woman, nominated by her classmates, who by the fullest use of her natural capacities in sports, studies or outside activities, best represents gallantry of spirit. Patsy has twelve varsity letters, four each in field hockey, basketball and lacrosse. She was captain of the hockey and lacrosse teams in her senior year. Also, in 1979-80, both the hockey and basketball teams were undefeated. At commencement in June 1980, Patsy was awarded the William David Lyons Memorial Cup for being outstanding in combining the qualities of academic achievement, leadership and athletic effort. She received a full athletic scholarship for field hockey to Stanford University. Patsy was a three time All-American, a member of the U.S. National Squad (top 50 players) from1980-1982, and the U.S. Junior National Team (under 21) in 1982. She was Stanford University Athlete of the Month for October 1981. While at Stanford, Patsy scored a total of sixty goals, a record that still stands.