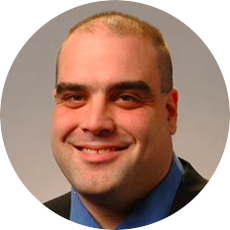 Mark Nori was an outstanding three-sport athlete at GA, earning 12 varsity letters in football, basketball and baseball. In football, he was selected to The Philadelphia Daily News All-City Team, Montgomery Newspapers' All-Area Team and The Montgomery Record All-Area Team in 1990 and 1991. Also in 1991, Mark was named to the All-State Team. He was selected to the Pennsylvania Big 33 All-Star Classic. Mark was awarded a full scholarship to Boston College, where he was a three-year starter and participated in three post-season bowl games. He was a two-time All-Big East selection and winner of the Scanlin Award - the highest honor bestowed on a Boston College football player. Mark has played in the NFL with both the Pittsburgh Steelers and the Jacksonville Jaguars. As a baseball player, Mark was a three-time selection to the All-Inter-Ac Team as a pitcher, with an overall record of 19-6 with three no-hitters. He led GA to two consecutive Inter-Ac championships in 1990 and 1991 and was twice selected for the prestigious Carpenter Cup. In basketball, Mark was team co-captain and Markward Award winner in 1991-92. He was selected to the All-Inter-Ac Team as a senior, leading GA to the Inter-Ac championship in 1991-92.