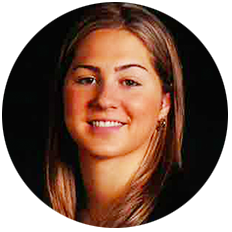 • Participated in three sports as a Patriot – basketball for five years, track for three years and tennis for one year

• Served as captain of the varsity basketball team senior year

• Team went undefeated in the Inter-Ac during five seasons

• Scored more than 1,000 points at Villanova in just two seasons

• Naismith Player of the Year candidate in 2009

• NCAA Basketball Final Four participant with the Blue Devils in 2006