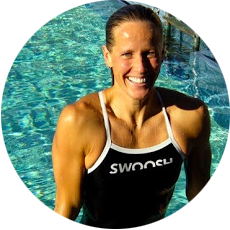 Trina Radke '89 has compiled one of GA's most distinguished careers in swimming. She led GA to two National titles and holds the school record for the 200 yard freestyle and the 400 yard freestyle relay. At the age of 14, Radke was the youngest national team member at the 1985 Pan-Pacific games, where she broke an American relay record in the 4x200 freestyle competition. In 1988, she competed in the Olympics where she placed 5th in the 200 m butterfly. At the University of California-Berkeley, she broke two school records and won every dual meet during the 1990-91 and 1992-93 seasons for the 200 m butterfly.