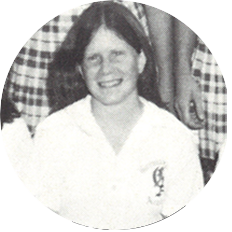 Karen Ann Kelso began competing in squash in 1978 in the sixteen and under age category. Nineteen years later, she is still ranked third in the U.S. She represented the U.S., competing in the Junior World Championships in Kungalv, Sweden in 1980. During her athletic career at GA, Karen played field hockey, squash, tennis, lacrosse and softball. She generously donated all of her winnings to GA field hockey while she retained her amateur status and established the Kelso Cup. She continued her career at the University of Pennsylvania, playing both field hockey and squash. Karen was an All-American in squash (top ten in the U.S.) all four years at Penn and captained the team in 1984-85. Karen has competed in three World Championships and been ranked as high as twenty ninth in the world.