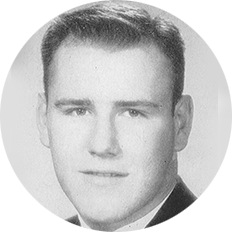 As a student, coach and Athletic Director at Germantown Academy, Jack Turner's athletic career has been impressive. During his high school years, Jack played football, basketball, baseball and track. He was honored as All-Inter-ac in football his senior year, before going on to the University of Delaware, where he was a three-time letter winner in football and baseball. Jack was honored as a two-time All-American in football and an All-American in baseball and was inducted into the University of Delaware' s Athletic Hall of Fame. He came to work at GA, where he was the Athletic Director from 1964-1986, coached varsity football and varsity baseball. As the football coach, Jack won more games than any other coach in GA's history. One of his most notable seasons was the fall of 1973 when his team went 10-0 and was ranked #2 in the Philadelphia area. Jack played a major role in the development of the men's athletic program at GA.