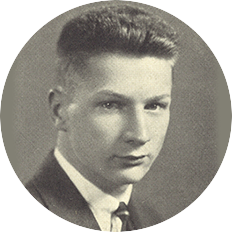 John McMaster is being inducted for his outstanding career in track and field. He was the reigning pole vault champion in the Inter-ac in 1935, 1936 and 1937 and held the Inter-ac pole vault record of 12' 8 1/2" of 33 years. In 1936, John placed second in the Regional Olympic Trials. He also placed first the Inter-scholastic track meets at Villanova, the University of Delaware, Dartmouth, Princeton and Harvard. He was named to the All-Scholastic Track and Field Team for three consecutive years. As captain of the track team his senior year, John won the National Inter-Scholastic Track Meet at Randols Island, NY. After graduating from GA, he attended the University of Michigan and won track letters as a sophomore and junior.