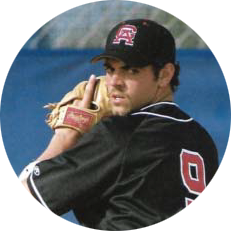 • Served as captain in 2004, pitched and also started in the outfield

• Did not lose a game in senior or junior year

• Led the Patriots to an undefeated Inter-Ac League championship in 2004, a season in which the Patriots set a school record with 32 wins and two losses and outscored opponents 276-50

• Helped lead his team to a national ranking of sixth by Collegiate Baseball, 10th by USA Today, and 16th by Baseball American. The Patriots were twice ranked as the top team in Southeastern PA by the Philadelphia Inquirer

• In 2004, he received First Team All Southeastern Pennsylvania honors by The Philadelphia Inquirer

• Received First Team honors by the Philadelphia Daily News, Times Herald, and The Intelligencer in 2004

• Named Philadelphia Daily News Pitcher of the Year in 2004

• Selected as a Louisville Slugger All-American in 2004

• Graduated from Lehigh University with a Bachelor of Science in Finance

• Four-year starter for the Mountain Hawks

• Earned Rookie of the Week honors twice in 2005