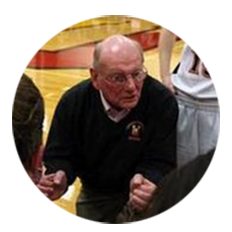 Jim Buckley has distinguished himself as head coach of many sports and as a faculty member of Germantown Academy since 1964. He has coached varsity boys basketball, girls basketball, golf, football, and baseball. He was assistant varsity coach for cross country, football, baseball, boys and girls basketball, baseball and boys lacrosse. Jim also coached junior teams in baseball, basketball, football, and boys lacrosse. He became Athletic Director at Germantown Academy in 1989, and that same year selected Coach of the Year for girls basketball. Jim held that position until 1993. Under his leadership, varsity girls basketball teams have an overall record of 235-74, a league record of 80-5 and hold 10 Inter-Ac League championships. They consistently rank among the top teams in Southeastern PA. Jim co-founded the Ft. Washington Athletic Association (for girls basketball). Five teams that he coached qualified for the National AAU Tournament. One team finished fifth, and one finished seventh, in the Nation.