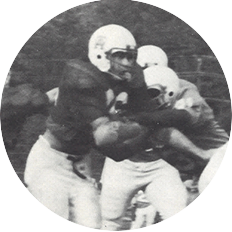 Jim Turner had a remarkable career at Germantown Academy, participating, and excelling, in several sports. Continuing the family tradition of athletic achievement, he was the winner of thirteen varsity letters at GA. Jim was captain of the baseball team in 1983, a member of the wrestling team in 1982 and 1983 and a member of the winter track team in 1980-81 and 1981-82. He also won many All Inter-ac honors including three years, first team in football and All-State first team in football in 1982. Jim was selected to the First Team All Decade Football Team for the Inter-ac League and to the First Team All City Team of the Decade. He continued his career at The University of Delaware as a starter and a winner of three varsity letters in football under coach Tubby Raymond. During his senior year at Delaware, Jim's team won the Yankee Conference Championship. The team was also semi-finalist in the NCAA National Playoffs.