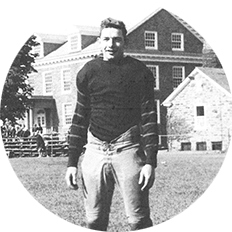 • Four-sport athlete while at Germantown Academy, playing Varsity Football, Varsity Baseball, Varsity Track, and Varsity Basketball.
• Named outstanding athlete of 1938.
• Lettered in Football in 1938.
• Named to the All-Inter-Ac Eleven Team as a back.
• Received the Maxwell Memorial Football Certificate for Sportsmanship and Outstanding Play in 1938.
• Participated in the 1938 Dream Football Game between All-Philadelphia and All-New Jersey teams.
• Earned the Inter-Ac Scoring Title for Football.
• Lettered in Baseball in 1938.
• Captain of the 1938-39 Track Team and lettered in Track for 1938-39.
• Set the 1938 Track Record for the 220 Yard Dash at the Triangular Meet in Haverford.
• Lettered in Basketball in 1937-38 and 1938-39.
• Received the 1939 Lamberton Medal for Senior Scholar Athlete.
• Served in the Army Air Force and received the Purple Heart, the Air Medal with one silver and one bronze oak-leaf cluster and The Royal Order of the Drips for being shot down twice.
• After the war he returned home to run his business, Warner’s Shoes in Chestnut Hill.
• Founder of the Chestnut Hill Development Group.