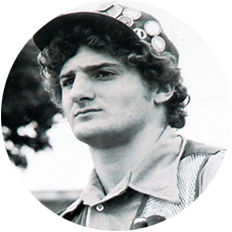 • Named to the football All-Scholastic first team in 1977

• Member of the 1975 Inter-Ac Championship Team

• Teammate and wrestling partner of Hall of Famer Jim Reilly

• Reached the semifinals at the 1976 Leigh National Prep Tournament

• Named to the All-American track team for decathlon

• Member of the track team that won the Inter-Ac Championship for the first time in modern times, participating in four events – first in pole vault, second in 120 high hurdles, shot-put and long jump. Helped GA with 18 of the 58 team points

• Lettered four years in track and was on two Pac 10

• Played on the 1983 Rose Bowl Championship football team, starting as the outside linebacker

• Received the game ball for Defensive Player of the Game in 1982 against quarterback John Elway’s Stanford team.