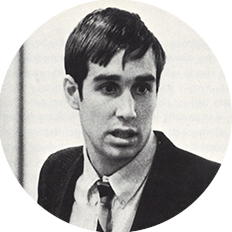 In four years as a varsity basketball starter, Eric Minkin amassed 1,358 points, placing him ninth on the all-time leader list. In Eric's junior and senior seasons, GA'S basketball team went 43-3. Those teams won two consecutive Inter-Ac championships with a combined 28-0 conference record. The team's only loss in his senior year came at the hands of Penn's freshman team. Davidson College awarded Eric an athletic scholarship and, while a student there, he was named not only to the All-Conference Team but also to the All-American Team for Jewish Student-Athletes. Following his graduation from Davidson, Eric played professional basketball in Israel from 1972-79. His team was league champions for seven consecutive years, including the European Club championship in 1977, the same year he was a key player in the first game between Israel and the USSR in 25 years. Eric's team defeated the Russians by 21 points. One million people greeted the team on their return.