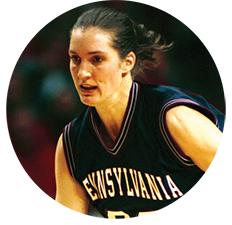 While at GA, Diana Caramanico '97 participated in four sports - Varsity Soccer for three years, Varsity Basketball for four years, Varsity Track and Field for four years and Varsity Water Polo for one year. She was captain of the Varsity Basketball Team for two years and Captain of the Varsity Track and Field Team for one year, and was named All-Inter-Ac League for Basketball all four years. At the end of her GA career, Diana held basketball records for most points in a career (1,486), most points in a game (32) and most rebounds for a career and a game. She was an All-State selection as a senior and was named GA basketball's Outstanding Offensive Player for three years. While participating in track, Diana held the shotput record of 35 feet, 10 inches and was on the record-holding 4x100 relay team. Diana was also the first girl to score in a varsity boys water polo game. Following her outstanding career at GA, Diana went on to play basketball at the University of Pennsylvania where she served as a two-time captain and was named All-Ivy League all four years. During her first season, Diana was named the Ivy League, Philadelphia Big 5 and ECAC Rookie of the Year. As a junior, she was named NCAA Division I third team Kodak All-American, NCAA GTE Academic All American and Academic All-Ivy. For three-straight years, Caramanico was honored with Ivy League and Big 5 Player of the Year, while serving as both conference's reigning scoring and rebounding leader. She helped the Quakers win their first-ever Ivy League championship as a senior in 2001 and left Penn as the all-time leading scorer at Penn, the Philadelphia Big 5 and the Ivy League for women's basketball, as well as the all-time leading rebounder and steals leader at Penn. From 2001-03, Diana played professional basketball for the Racing Club in Oftrasbourg, France. Diana was the leading Division II scorer in France both years.