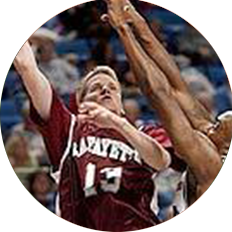 Brian Burke was a two-sport athlete while at Germantown Academy, playing Varsity Basketball and Baseball and serving as a captain of those teams in his senior year. He left GA as the sixth all-time leading scorer for boys and holds the single season assist record in basketball and is the second all-time assist leader behind Alvin Williams. During his tenure here, GA basketball teams went 35-5 in the Inter-Ac, winning all four Inter-Ac titles. In one of his stand-out games against Bishop Neumann High School, Burke was 19 for 19 from the free throw line and finished with a career free throw percentage of 91 percent. Burke averaged 24.5 points per game in his senior year and scored a career high 39 points in games vs. Bishop Neumann and Lawrenceville as a senior. On the diamond, Burke was a member of the 1996 Baseball Inter-Ac Championship team and accumulated a career record of 18-5 as a pitcher. He received the Leopold Memorial Prize for scholarship and athletics and went on to attend Lafayette College to play basketball. He was named captain of the 2001-02 basketball team and played on the 1998-99 and 1999-2000 Patriot League championship teams. The 1998-99 team was the first Lafayette team to make an appearance in the NCAA Tournament in 42 years with a 22-8 record. In 2001-02, Burke was named All-Patriot League first team and named League Player of the Week twice. He left his mark at Lafayette the same way he did at GA. He is the all-time assist leader in the NCAA Tournament for Lafayette with 11 dishes. He also holds the Kirby Sports Center single-game scoring record with a 43-point effort in which he made 16 field goals. His 11-for-11 performance from the free throw line is also a Kirby Sports Center record. Burke found the time to author an online journal during his junior and senior years which chronicled the life of a student-athlete and recieved the ECAC Award of Valor in 2001. Burke finished his collegiate career by being named the Charles L. Albert Award winner, which is given annually to the most outstanding senior athlete at Lafayette.