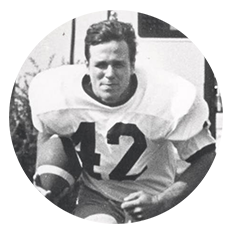 Bill Armstrong '68 was honored for his outstanding accomplishments as a football, basketball, baseball and track player at GA. In football, he was twice honored as All-Scholastic in Philadelphia and, in 1967, received the Maxwell Club Award for outstanding play in the Inter-ac. He was captain his senior year and later played in the first Montgomery County All-Star game in 1968. He also had a great impact on the basketball, baseball and track teams, where he accumulated 10 varsity letters. After GA, Bill went on to make a mark on the record books of the University of Delaware. He was named an All-American in 1971, led his team to the National Championship for Small Colleges that same year, and his rushing record of 2340 yards is 6th on the all-time rushing list. After he graduated in 1972, he signed with the Miami Dolphins as a free agent.