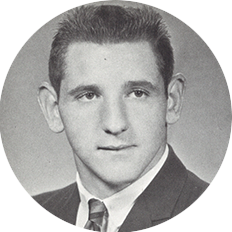 Bernie Dallas '61 played four years of varsity football, wrestling, baseball and two years of varsity track. From GA, Dallas went on to graduate from the University of Massachusetts and was then recruited to play professional football in the Continental Football League for the Philadelphia Bulldogs. In 1968, he signed a contract to play football for the New York Giants. He was killed tragically that same year in a car accident.