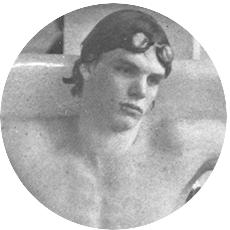 Bart Schneider is one of the most accomplished swimmers to come from Germantown Academy. He was the fastest high school sprinter in the history of the sport and he still holds two school records in swimming. He began his swimming for GA's JV team. This was the first of seven years of GA swimming for Bart: grades seven through twelve, and a post graduate year. Outside the varsity season, he swam year round for GAA.C. Consistently ranked as an All-American, Bart's senior and post graduate years were the highlights of his swimming. In the summer of '78, he won a gold medal in the Junior Olympics. In '80 he swam the 20.01 50 yard freestyle that remains on the record board today. Bart qualified for the Olympic Trials that year, the year of the U.S. Olympic boycott. Bart is currently involved with GA as a Master swimmer.