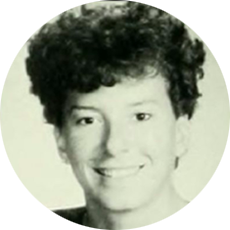 Amy Reydel entered Germantown Academy in the fifth grade and is being inducted for her accomplishments in field hockey. She was captain of the Lower School "Red Team" and a member of "Private Eyes," Inter-ac's All-Star field hockey team, traveling to Los Angeles and Virginia Beach. Amy was in the Junior Olympics in St. Louis and Oklahoma City. For three years she attended the Denver "B" Camp, Olympic Development Camps. In 1986, she was selected to the All-American team in field hockey. In 1987, Amy was chosen for the Honorable Mention All-American team in lacrosse (scored 50 goals in 13 games). She was captain of both the field hockey and lacrosse teams in her senior year. Also in 1987, Amy won the Girls' AA Bowl for athletic ability and sportsmanship. Attending Duke University on an athletic scholarship, she played four years as a varsity starter on the Duke field hockey team. Amy volunteers with RBI (Reviving Baseball in Inner Cities) in association with major league baseball and is a volunteer with an ice hockey program in Harlem, sponsored by the NHL.