The First GA/PC Day Meeting on the Gridiron 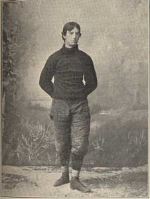 Although the forthcoming GA/PC Day looms in near epic proportion, the first meeting of these two schools to play football must have been a legend unto itself. To the modern eye, the football of the 1880s would look more like modern-day game of rugby. Here is a first-hand description by GA graduate Louis dePui Vail (GA Class of 1886):

There was much more kicking of the football and less running it … the football was round, and not oval … almost everybody playing the game was a very fair kicker … There were no “head helmets” worn … no “nose guards” no padding at [the] elbow and knee and collar and a “shin guard” was such a rarity as to excite a great deal of wonder and comment.

Prior to the forming of the Inter-Academic Athletic Association in 1887, GA had been fielding powerhouse teams. Here, again, Louis Vail:

completely outclassed the schools … until about '87 … probably [because] boys had … more open lots on which to play … In 1886 defeated the Penn freshman, 6 to 0. 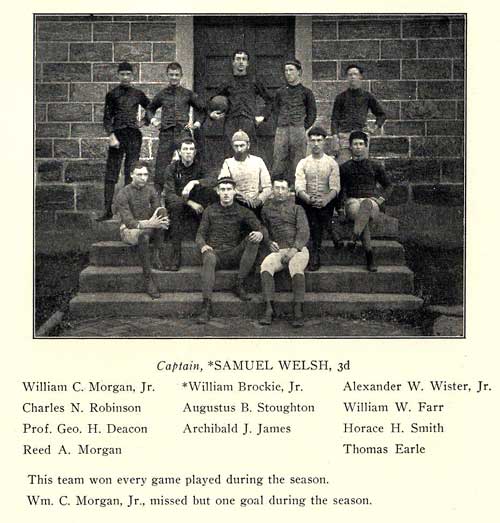 GA’s football tradition began with arrival of Dr. William Kershaw as the school’s headmaster. Eleven students and one teacher (George H. Deacon, the founder of the Inter-Ac) made up the first team in 1880. Looking at the 1881 team as it posed on the front steps of the school, we see group of seasoned athletes whose undefeated season was well earned. The fellow with the beard is obviously George Deacon.

The first meeting of the GA-PC was simply a part of the first Inter-Ac season. The game was played at and won by the home team 20 to 6. And, in point of fact GA had an undefeated season. No one at that time could have envisioned the classical tradition that would evolve into century-long tradition. On that team was Abram S. Valentine who has been credited with inventing one of the first baseball catcher’s mitts. Tangentially, the members of the Inter-Ac were , Penn Charter, Episcopal Academy. ,, , The , , and .

Even in those first days of Interac football, a lot of spectator spirit filled the sidelines. For the second GA-PC meeting, the “Charter” crowd anticipated landslide victory. More of comments by Louis dePui Vail:

[Some] of the enthusiastic Penn Charter “rooters” talked about a score of 64-0. Preparations to celebrate the victory were made before the game began. won, however, 37-8, so Penn Charter had very little use for the horns with which they had so plentifully provided themselves.

So began the long tradition. But, the tradition just didn’t begin ipso facto.

Educational reform became a hallmark of American culture after the Civil War. A portion of that reform focused on physical education that initially was spearheaded by the YMCA movement. Both Headmaster Kershaw and his colleague, George H. Deacon were forward looking educators who quickly saw the virtue in the ideas espoused by the YMCA. What better place to implement such a progressive philosophy than in the realm of an extra-mural after-school sports program? The chief element certainly was present youthful energy and ebullience. And what better way to seek a healthy mind and body than through extra-curricular sport. So we see that the Inter-Ac games, including the first meeting of GA-PC on the gridiron, most likely started as the by-product of a broader, forward-looking educational philosophy.