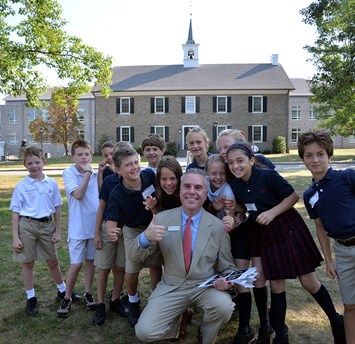 Rich Schellhas 1760 (shell-hahse) officially became Germantown Academy’s Head of School on July 1, 2016. No stranger to GA, Schellhas spent seven years in increasing positions of administration, first coming to Fort Washington in 2009 as the Head of Upper School before adding the title of Assistant Head of School in 2012. In 2015, he was named Head Elect by the Board of Trustees and worked alongside Head of School Jim Connor 1760, who retired after 26 years, in 2016.

During his time at GA, Schellhas has been an inspiring educator and a strong and steady presence for the Upper School faculty and students, as well as a guiding force across the school. He has invigorated and reshaped GA’s academics, student life and faculty collaboration with the addition of new courses, educational initiatives and activities. He led Germantown Academy’s Challenge Success team in conjunction with Stanford University to analyze issues of student stress and achievement, which morphed into a 3-year study to enhance student engagement, examine homework, and bolster student health and wellness. Schellhas also initiated Challenge GA, an Upper School-wide program created around the principles of Design Thinking, a concept which all three divisions have begun to adopt into their curriculum.

On an all-school level, Schellhas served as the catalyst behind restructuring Germantown Academy’s administrative structure, including the redesign of the curriculum committee, school task forces, and the reorganization of the management team in conjunction with Connor. He has since spearheaded efforts to reinvigorate how GA thinks about and develops curriculum across the three divisions. Schellhas initiated and oversees the PreK-12 international program, which includes faculty and student exchanges and curricular cooperation with schools in China, Poland, Spain and the United Kingdom. He also developed the Curriculum Partnership Program between Germantown Academy and Capital Normal University High School in Beijing to expand international opportunities and create a significant source of annual auxiliary income to offset tuition at GA. Schellhas was thrilled to be inducted into Germantown Academy's honorary alumni society as a member of the Class of 1760 during graduation in July 2020.

Schellhas came to GA from St. Paul’s School outside of Baltimore where he was the Assistant Headmaster at the all-boys, International Baccalaureate, independent day school. During his 10-year tenure at St. Paul’s, Schellhas was Chair of the Modern Language Department, Pre-1st through 12th grade, managing language development and enrollment in a vital and growing program. While in that role, Schellhas also oversaw four exchange and homestay programs. He chaired St. Paul’s self-study accreditation process, became Academic Dean, Pre-1st-12, in 2003, Assistant Head of School in 2005, and, the year prior to his coming to GA, was also the Acting Principal of their Upper School.

Schellhas also played a key role in assisting the Headmaster in short- and long-term school-wide planning, including a $25 million campaign for faculty endowment and the building of a new Upper School addition. He chaired the professional development and curriculum development committees and served as the advisor to the Lower, Middle and Upper School principals and oversaw the school-wide faculty hiring, observation and evaluation process.