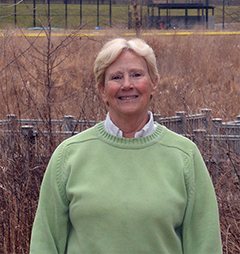 That familiar intake of breath, the bounce in her step, the pep in her voice, the ease in her laughter. The litany of announcements delivered high-speed, rapid fire, lickety-split, and punctuated with her trademark, “Let’s give it up for _______.” Fill in the player, the team, the coach. She distributes accolades with ease and information with elan. Every corner of the campus will miss her when she leaves…will feel her absence and sense the void.

Several months ago, Ginny Hofmann informed Head of School Rich Schellhas that she would be retiring at the conclusion of the 2019-20 school year. She asked that we not share her news until a new Athletic Director had been appointed. For forty-four years, Ginny has set the bar high…in the Athletics Department, the Admission Office, the Physical Education and Wellness Department, and the Belfry Club. She has been GA’s very own multi-talented, multi-tasking, world-traveling, team-building, theater-going, renaissance woman. Just between you and me, Ginny’s creativity, energy, organizational wizardry, and persistent, pesky propensity for excellence has raised that bar a little higher each year. Even on tippy toes the bar is just too far away for those of us, trying valiantly to keep up.
Ginny has been the quintessential school person. Forget the triple-threat. Ginny is at least an octuple-threat. And it must be noted that, of course, Ginny is remarkable not just for the number of different outfits she wears in a day, but for the effortless, optimistic, I’d-be-happy-to-help style with which she wears those numerous ensembles. We are not alone in our appreciation of Ginny’s many gifts: teacher, coach, administrator, colleague, friend. Ginny has been inducted into several Halls of Fame, named Lacrosse Coach of the Year by the Philadelphia Inquirer, and honored with the Michael F. Mayock Distinguished Teacher-Coach Award by the Philadelphia Foundation…the first woman to receive this recognition. The bar is drifting upwards. I can hardly see it.
In the end though, Ginny is clear. Her greatest joy is watching a student who thinks they can’t (and they’re probably right) surprise themselves and learn a skill, whack a birdie, swing a club, and actually make contact. Ginny loves her students, laughs with them, and maintains long-term friendships with many of them over the years. Ginny Hofmann is a GA legend, institutional memory and all that jazz, but she is a legend who lives among the people, inspiring us to reach just a little higher and be our best.
While she won't be completely leaving Fort Washington, as she has signed on to help out part-time in Athletics and Admission next year, please join me in wishing Ginny well as she plans to see even more of the world.